Solutions to Reduce The Number Of Hospital-Associated Infections Essay

Solutions to Reduce The Number Of Hospital-Associated Infections Essay

When we think about hospital, one thing comes to our mind is “Hospital is the place for cure”. This revolutionary idea of treating the patients under the same roof was considered to ease the job of healing. But due to lack of knowledge of sterilization and antisepsis, it turned wrong in Pre- Listerian era leading to gangrene and death of patients which were suffering from wounds. Due to this reason a new discipline was emerged called as senics which was mainly dealing with the Hospital Acquired Infection (Nosocomial Infection). Semmelwis in 1861 with the help of medical officer and students observed the association of Puerperal sepsis in patients. Thus by the introduction of hand washing with chlorinated lime, he was successful to bring dramatic reduction in infection rate. Hospital acquired infection (HAI) are infections acquired during hospitalization, which are not present at eh time of admission (Atata et al, 2006). Solutions to Reduce The Number Of Hospital-Associated Infections Essay.

According to Baveja in 2002, the term hospital acquired infection, hospital- associated infection, hospital infection or nosocomial infection(nosocomion,meaning hospital) is defined as infection developing in patients after admission to the hospital ,which was neither present nor in the incubation period at the time of hospitalization . Such infections may become evident during their stay in the hospital or sometimes after their discharge. Due to its increased mortality and morbidity in the hospital patients these HAIs are of significant cause. HAIs are also caused due to prolonged hospital stay which are inconvenient for the patient and constitute economic burden on health care (Malhotra S, et al 2014).

Dancer in 1999, depicts that microorganisms which are associated with hospital acquired infection displays two important characteristics, firstly those are the pathogens of well-established medical importance and secondly they also can withstand the hospital environment which benefits them outside temperature. Thus providing an appropriate environment niche for their survival until they transfer back to patients. Some pathogens originate from patients own flora especially those who are immunocompromised whereas others can survive in human tissues and thus rely upon person to person spread in order to disseminate.

The patients who are immunocompromised due to underlying diseases, medical or surgical treatment, age are typically affected by nosocomial infections. In pediatric ICU, the hospital acquired infections are approximately three times higher than elsewhere in hospitals (Weistein 2006). Pathogen transference occurs most commonly by presence of bacterial or fungi in inanimate surfaces and equipment or between the hands of health professionals and patients (Kayabas et al., 2008). The transmission of microorganisms from hands of health care workers, medical equipment and surfaces which has become contaminated with a wide variety of pathogenic and nonpathogenic organisms has become a significant proportion of hospital environment infection which ultimately results in crosscontamination (Sehulster et al., 2003). When compared to other hospital patients, the patients who are hospitalized in ICUs are 5-10 times more likely to acquire nosocomial infection. The risk of infection and the frequency of infection vary by infection site. The increasing incidence of infection is caused mainly by antibiotic-resistant pathogens leading to seriousness of hospital acquired infection (Weber 2006). Some of the common human pathogens like, Staphylococcus aureus, Acinetobacter spp, En­terococcus spp and Escherichia coli can survive for longer periods of time on the hospital surfaces or formites that can potentially transmit infectious organisms (Kramer et al., 2006).

The primary sources of indoor air contamination are the microorganisms. When compared to outside air environment, the indoor air environment can potentially place patients a greater risk because enclosed spaces can confine aerosols and allow them to build up to infectious level. Solutions to Reduce The Number Of Hospital-Associated Infections Essay.  The relative humidity and/ or the moisture content of the materials determine that to what extent different micro-organisms are able to grow on indoor or outdoor materials (Dhanasekaran et al., 2009). Adebolu and Vhriterhire in 2002 reported that magnitude of hospital acquired infection is dependent upon the number and type of visitors, mechanical movement within the enclosed space, quality of hospital systems and level of hygienic conditions in hospital environment.

Sites where infections acquired in hospitals and other healthcare facilities. To be classified as a nosocomial infection, the patient must have been admitted for reasons other than the infection.Solutions to Reduce The Number Of Hospital-Associated Infections Essay.  He or she must also have shown no signs of active or incubating infection. Depending on the hospital involved, 1 to 10 percent of the patients affected die as a result of the nosocomial infection (George Krucik 2014). Most of these infections can be prevented while others are unavoidable. In hospitals the contaminated surfaces are increasing the cross transmission which is shown in figure-2. 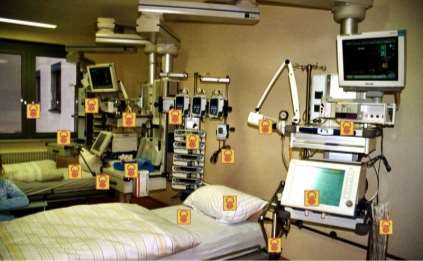 In the United States, it has been estimated that 9.2 out of every 100 patients acquire a nosocomial infection

According to the CDC, the most common pathogens that cause nosocomial infections are Staphylococcus aureus, Pseudomonas aeroginosa, and E. coli (C.Glen May hall 2004).

Based in biological and clinical criteria, the national Healthcare Safety network (NHSN) has categorized into 50 infection sites under 13 major types for the surveillance purpose (W. Bereket et al., 2012). When choosing the test organisms that are clinically relevant to human pathogens, six different organisms are considered to be major threats. Solutions to Reduce The Number Of Hospital-Associated Infections Essay. These pathogens cannot cause the most devastating illnesses but majority of them will compromise with antibiotic resistant infections that are seen in most healthcare settings. These are commonly called as ESKAPE pathogens namely Enterococcus faecium, Staphylococcus aureus Klebsiella pneumonia, Actinobacter baumanni, Paeudomonas aeruginosa and several species of Enterobacter. These (ESKAPE Pathogens) pose a biggest threat that physician face today. To fight with them we definitely need some new drugs and need some cooperation among industry and government to setup R&D (research and development) infrastructure to fill the needs of new drugs that will tackle tomorrow’s infectious diseases threats.

It is oxidase negative, Gram negative, and facultative anaerobic. It is one of the common organisms that are involved in Gram negative sepsis and endotoxin-induced shock. It is one if the leading cause of blood stream infections among all other Gram-negative pathogens. It is the fifth leading pathogen for causing blood stream infection in United States (Maazuddin t al., 2014). According to Bijay Kumar Chandra 2012, a study was concluded that Escherichia coli were most common agent found in nosocomial diarrhea. Some of the common infection caused by this organism includes wound infection, urinary infection, meningitis in neonates, pneumonia in immunocompromised hospitalized patients and E. coli associated diarrheal disease or gastroenteritis. It also possess broad range of virulence factors which are responsible for disease such as UTIs and gastroenteritis (Brooks GF et al., 2007).

These are gram-positive cocci typically arranged in short chains and pairs. These grow optimally at 350C on a complex media which requires carbon such as glucose, nucleic acid base and vitamin B. when enriched with sheep blood agar, it supports the growth with large and white colonies. Enterococcus species are facultative anaerobic and are considered as a part of normal flora in genitourinary tract and gastrointestinal tract of humans. Enterococcus species have emerged as a one of the most important pathogen of hospital environment. The major enterococcal infections of humans are caused by two species namely Enterococcus faecalis and Enterococcus faecium. Solutions to Reduce The Number Of Hospital-Associated Infections Essay.

Staphylococcus aureus is by far the most important pathogen in the hospital environment in all the genus staphylococcus. It is non-spore forming, non-motile, gram positive, catalase positive facultative anaerobe arranged in clusters (Wahington CW et al., 2006). The indicence of nosocomial blood stream infection is more known to be caused by S. aureus (Rodrigo et al., 2012). S. aureus is rarely isolated from urinary tract infection (T.Grace et al., 1993). This S. aureus is both pathogen and commensal. Approximately 30% individuals are intermittently colonized with S. aureus whereas 20% are persistently colonized. It is one of the leading cause of hospital acquired infections. Methicillin resistance staphylococcus aureus (MRSA) are the one which causes most of the infection and its isolation is continuously increasing (S Khono et la., 2007). Infections may occur during hospital stay by streptococcus and staphylococcus species when compared to other Gram-negative bacteria.

The coagulase-negative staphylococci (CNS) species are widely known to cause NTs specifically bacteraemia in patients with prosthetic implants and catheter and also in patients who are immunocompromised. Staphylococcus epiermidis and Staphylococcus haemolyticus are the teo well known species and occur most common in CNS species (C.Geary et al., 1997). Coagulase negative staphylococci, Staphylococcus aureus and Enterococcus are the three most widely isolated pathogens which tends to cause blood stream infections.  Solutions to Reduce The Number Of Hospital-Associated Infections Essay.After hospitalization of the patient, the CNS usually takes 19 days to cause bacteraemia. The mortality rate of CNS is less when compared to some other pathogens (Aldof et al., 200). For the colonization of CNS, the main reason is its antimicrobial resistance. This CNS isolates is resistant to Oxacillin or nafcillin and methicillin (T Grace et al., 1993).

It is a Gram-negative with mucoid polysaccharide capsule typically arranged in pairs. It is a well known cause of pneumonia, endophthalmitis, conjunctivitis, sepsis and also associated with high mortality rates. Potential reservoirs include humidifiers, equipment, incubators, sinks, tap water and hands of health care workers. The identification of this pseudomonas aeruginosa is mainly based on simple biochemical test and colony characteristics. It colonizes the respiratory and gastrointestinal tracts of the hospitalized patients. When normal defense mechanism is impaired, the pathogenesis by this organism is initiated. Pseudomonas aeruginosa attaches and colonizes the mucous or skin and invades locally to produce systemic disease. This process is mediated by different virulent factors like enzymes (proteases, elastases, phospholipase C), Pili and toxins (endotoxin A). P. aeruginosa produces infection such as blue-green pus, urinary tract infection, meningitis, and necrotizing pneumonia (Contreras GA et al., 2008). Many contemporary studies showed that, the antibiotic resistance among the gram-negative bacteria is increasing especially of pseudomonas aeruginosa. The rate of resistance towards ceftazidime and imipenem by Pseudomonas aeruginosa was increasing dramatically. Solutions to Reduce The Number Of Hospital-Associated Infections Essay.

There are number of simple care practices that can reduce the probability of developing a Hospital acquired infection. Some of them include sterilization of resuscitation bags and masks, elimination of overcrowding, decreasing number of heal sticks, use of sterile suctioning technique, careful preparation and storage of infants formulas, using single dose administration of medications and avoiding drugs associated with increased risk of nosocomial infection.